We arrived in Jeddah on Monday morning. A half hour before the plane landed, the pilot let us know that we were entering the area around Mecca and that it was time to get covered. After this announcement, the plane became very busy as all the women begin putting on their abayas. Like all the other women, I donned my own abaya – a black robe and headscarf that all women in Saudi are expected to wear.

Upon landing, we hear: “Welcome to Jeddah. The time is 4:30am and the temperature is 32 degrees centigrade”. I think it was at that moment that Kevin’s eyes popped out of his head.

After reminding Kevin that 32 isn’t THAT hot, we got off the plane among a sea of striking people: Men in thobes (white robes), women in abayas (black robes), and pilgrims in imrah clothing (basically look like white towels), and hordes of muslim-asian women congregated in groups. The people watching in the airport is really great – and we had plenty of time to do it, as even with only about 5 people in front of us in the immigration line, we were still there for over an hour.

There is just one long, straight road along the coast between Jeddah and Kaust. The drive takes about an hour, and as the sun rose, we could see the orange and rocky  land, a few villages, camel farms and gas stations with tiny amusement parks on the side of the road. There are mountains in the distance, but this area is flat and dry each mile looking exactly like the last.

An hour later, we arrived at the high walls that surround Kaust – there are armed guards and several layers of security that we must pass through. As soon as we arrive inside through, the grass is green, the palm trees are perfectly spaced, and the architecture is striking. Suddenly, we have found a middle eastern Truman Show neighborhood. Every house is the same – every item perfectly placed.

The driver picked up the phone and found out where to drop us. Through his Arabic/English we heard the word “Island” in our address, and we were immediately delighted. We knew this meant we would live in the neighborhood we were hoping for – on Saffa Island, just around the corner from my parents.

He took us to our new home – a two bedroom townhouse that is massive compared to the British housing we have become accustomed to. Here are a few pictures of the house: 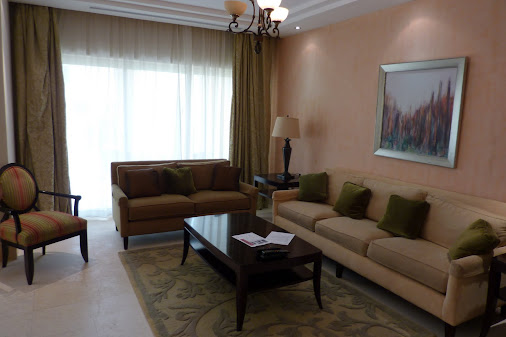 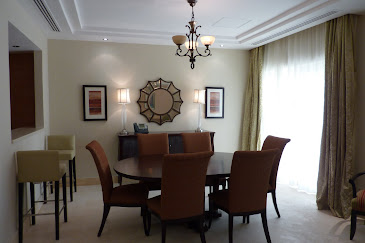 The vast majority of our belongings are being shipped to meet us at our new home in Saudi after Kevin get’s a long-term work permit. So, most of the last week we’ve spent exploring our new community and shopping at the Tamimi Supermarket for all of our house needs.

Everything has been great so far – we like our house, we like all the amenities here, and are looking forward to making some new friends. The only thing that hasn’t gone so well is that our dog, Muttley, ended up getting stuck in the UK for an extra week unexpectedly. We look forward to him arriving on Wednesday though – if everything goes to plan.